The Green Mountain Byway tells the story of Florida itself, the story of change. In the space of less than one hundred years the landscape of the corridor has changed completely, not once, but many times. Throughout history people from the Native Americans to citrus and railroad pioneers to modern sports champions have been drawn to this region for for its unique lake and topography. 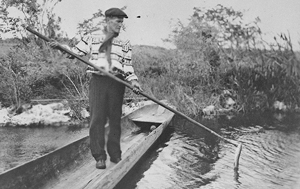 Before the discovery and colonization of Florida by the Spanish, change occurred very slowly, not much faster than the pace of climatic change. At the time of the first arrival of Europeans, the area along the shoreline of Lake Apopka was populated by Native Americans known as the Timucua.

The Timucua grew corn, squash and gourds, gathered the starchy wild coontie root, hunted the abundant game of the area, and fished the teeming waters of Lake Apopka. The lake was much larger then, second in size only to Lake Okeechobee on the Florida Peninsula. Many of the lowland hardwood hammocks now ringing the lake were then marshlands. The Timucua were decimated by epidemics of infectious diseases brought from Europe by the explorers and colonists. By the early 18th century, the Timucua had disappeared from the shores of Lake Apopka.

Native Americans of the Creek Confederacy of Georgia and Alabama began to move into Florida in the middle of the 18th century. The Creeks adapted their culture to the climate and conditions of Florida, and eventually became known as the Seminoles. Three wars between the Seminoles and the U.S. Government resulted in the eventual expulsion of most of the Seminole people to the American West.

Settlement of the Region 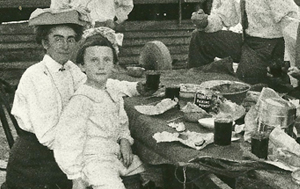 By the 1850’s small settlements begin to appear along the shores of the lake. The first European-American settlers found a huge lake, teeming with fish and wildlife. The sand hills were dark green with old growth pine, some four feet in diameter and over one hundred feet tall.

The rate of settlement increased after the Civil War. Transportation around Lake Apopka was convenient by boat, but the lake itself was land locked and transporting goods and produce out of the area was expensive and slow. In 1879 work began on the Apopka-Beauclair canal. The canal was meant to connect Lake Apopka to the Ocklawaha Chain of Lakes, but the work went much slower than expected. By the time the canal was completed in 1887, two railroads, the Orange Belt Line and the Tavares and Gulf, were completed around the western and southern shoreline of the Lake. The small agricultural community of Oakland experienced a brief economic boom when the Orange Belt Railroad based its headquarters and shops there.

The immediate consequence of the completion of the Apopka-Beauclair Canal was a drop in the lake level, draining much of the bordering marshland. This was probably the first major change in the landscape since the end of the last ice age. Land that was formerly marsh was made available for small scale muck farming with a minimum amount of ditching needed. Much of the remaining marshland along the west shore slowly grew up into lowland hammock.

The newly built railroads provided efficient transport for the products of the region; agricultural produce, turpentine, and lumber. The lumber industry grew at an unsustainable rate and by the late 1920’s the old growth pines were completely logged out. The lumber industry disappeared, and the landscape had changed again.

The earliest settlers had cultivated small citrus groves, and citrus acreage grew steadily over the years. After the invention of frozen juice concentrate in 1945, acreage expanded rapidly. By the mid 1950’s practically all of the uplands within the Green Mountain Scenic Byway corridor were planted in citrus.  The few remaining remnants of Lake Wales Ridge Scrub were mainly on slopes too steep to cultivate. Hills that had been once covered with pine forest and scrub were now blanketed in symmetrical green rows of orange, grapefruit, and tangerine trees.

Dramatic change occurred again with the blows dealt to the citrus industry by the devastating freezes of the 1980’s. Citrus cultivation all but ceased on the shores of Lake Apopka. The hills were set in pine plantations and fenced into pasture, awaiting the next and probably greatest change.

Through it all, the only constant has been the sand hills themselves, which have endured since the oceans receded. But in Florida, nothing, it seems, not even the hills, are permanent. Many of the hills of the Lake Wales Ridge in South Lake County, even some of the largest and most prominent,
are succumbing to massive grade, fill and haul operations while being developed for housing and commerce. So far, the skyline of the Green Mountain Byway, which includes Sugarloaf Mountain – the highest point in peninsular Florida, has evaded this fate and is still intact.

The greatest change for Lake Apopka began in 1941, when a levee was constructed across the northern end of the lake, and 20,000 acres of lake bottom and marshland were drained for agriculture. The constant pumping of nutrient rich water off the fields resulted in a chronic algal bloom.  Lake Apopka, once the second largest lake in the state, and with water so clear that anglers said that you could pick out the fish you wanted to catch, is now the fourth largest, and has been abused to the point where it’s pea green water holds much more attraction to research scientists studying pollution than it does to anglers seeking trophy bass.
However, there is hope for Lake Apopka. Change, this time for the better, is in the form of a 25 to 50 year, $130 million dollar restoration project to restore the lake to a Class III waterway. The St. Johns River Water Management District has purchased the muck farms and has a long-term plan to restore the former farms to marshland. The North Shore Restoration Area has become an international destination for bird watchers. In 1998, the Christmas Bird Count recorded a national inland record of 174 species. The total species count is more than 270, and continues to grow. 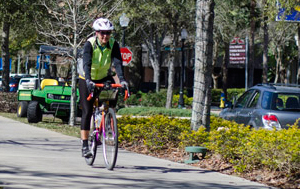 Despite the changes that have occurred, the natural, historic and archaeological past can be experienced throughout the corridor. Over a dozen buildings and sites are considered eligible for listing on the National Register of Historic Places, and two – the Harper House in Montverde and Meadow Marsh in Tildenville, are already listed.

The Byway bisects the scenic and historic campus of the Montverde Academy. Remnants of extremely important Lake Wales Ridge scrub are scattered along the roadway and among the hills.

Several species of endangered plants grow along the right of way. So far, 23 threatened, endangered, or species of special concern can still be found within the corridor.

It is the hope of the Friends of the Green Mountain Scenic Byway that the next chapter in the Byway Story will be harmonious and positive for residents and visitors from around the world.