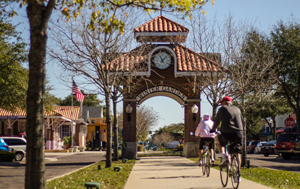 The City of Winter Garden was established by Henry Harrel of Alachua in 1857. Formerly known as Beulah, the name Winter Garden was selected in 1908 because of the perennial blossoms and mild winters. Its downtown area has recently benefited from successful redevelopment efforts while maintaining that quaint feel with local stores, restaurants, and a train museum.

While in Winter Garden, the West Orange Trail is a wonderful place for a bike ride or a leisurely stroll. The city also has two large parks, a public boat ramp on Lake Apopka, along with playground and picnic areas.

The City of Clermont was established in 1884 by the Clermont Improvement Company and named for the manager’s, A.F. Wrontniski, birthplace of Clearmont, France. It’s known by the locals as the “Gem of the Hills” due to the number of lakes surrounding Clermont and the rolling hills in much of Lake County, not common in most areas of Florida.

The City of Clermont is home to the National Training Center, a world class sports and athletics center. Clermont offers a new Rails to Trails bike trail which extends from Clermont to Apopka, approximately 30 miles in length.

Over time, the picturesque Indian designations of the majority of the local waters in Lake County have been forgotten, but with respect to the name “Minneola,” we proudly hail the Indian interpretation of “much water.”

Central Florida’s mild winters contribute to Minneola’s appeal, making it a very desirable place to reside. Highway 27 intersects our city, thus providing not only a major corridor, but also convenient access to several bordering cities. With a major metropolitan area, an international airport, and major tourist attractions only a short distance away, Minneola has much to offer.

The town of Montverde was established in 1885 and incorporated in 1925. Located on the west shore of Lake Apopka, its name comes from the Spanish words “Monte Verde,” meaning “Green Hill”. It was named by an early visitor from Vermont who came across Lake Apopka and was impressed by the rolling green hills that surround the lake. 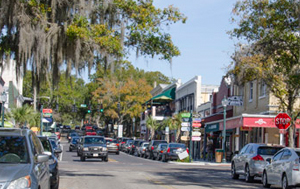 The City of Mount Dora, originally and briefly known as Royellou, was renamed Mount Dora in 1883. Ross C. Tremain was the town’s first official postmaster and derived the name Royellou from his three children: Roy, Ella and Louis. Ms Dora Ann Drawdy homesteaded the area in the mid-1800s.

Federal surveyors named Lake Dora for her. The name Mount Dora was selected because the settlement rests on a plateau 184 feet above sea level. Mount Dora has numerous opportunities for recreation and dining.

The Town of Oakland was incorporated in 1887. The name comes from the expansive live-oak trees in the area. It became a thriving city, with sawmills, sugar mills, hotel, and shops all contributing to a bustling downtown area.

Over a 30 year period the railroad decline and a disastrous downtown fire contributed to the decline of Oakland’s business district. It has since rebounded and is now a focal point for the region. The Town’s elected officials and employees are committed to maintaining and enhancing Oakland’s treasured small town character and preserving a “sense of place”. Oakland is also home to the Oakland Nature Preserve featuring a 2/3 mile boardwalk leading through the preserve to a covered pavilion on Lake Apopka.

The Town of Astatula, incorporated on May 5, 1927 was settled in 1872 by T.A. and Mary C. Hux. The Astatula of pioneer days was sparsely populated. Daniel W. Lowell served as the first postmaster. Astatula Post Office was created December 8, 1884.

Formerly known as West Apopka, the community of Ferndale, is a rural community of about 230 residents. It is located in Lake County, bordering beautiful Lake Apopka. Ferndale will soon be home to the new 192-acre Ferndale Preserve which will provide many unique outdoor experiences.