Learn here about projects planned or completed by the committee, and projects related to Green Mountain Scenic Byway.

Although the Scenic Highway is the collection of actual roads, the concept of “scenic highway” includes a corridor of variable width composed of the surrounding lands and communities. The corridor contains the important natural, ecological, historical, and cultural resources. One of our first significant tasks was the creation of the Corridor Master Plan. This plan looked at the current conditions within the corridor with the goal of preserving the historic characteristics of the area. The plan also addresses transportation issues, multi-use trail design, open spaces and land development. While this plan was being put together, a significant portion of the byway was being prepared for housing development. The development names include: Plaza Collina, Bella Collina, Sugar Loaf 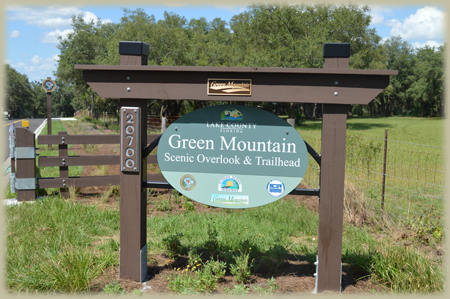 Mountain, Hills of Minneola, and Black East. These developments represent thousands of new homes and millions of square feet of commercial real estate planned for development over time. These huge developments were the “irrational exuberance” of the early 2000s housing bubble. The “Great Recession” resulting from the popping bubble caused a good amount of wealth to evaporate pausing, but not stopping the development. People continue to move to Central Florida creating the need for more housing and business.

The good news is that the Great Recession did not adversely impact environmental resources and recreational opportunities along the byway. The GMSB is now like a necklace that connects some “pearls” of parks and preserves, like Newton Park in Winter Garden, the Oakland Nature Preserve, Truskett Park in Montverde, the Ferndale Preserve, the vast Lake Apopka Northshore property and the Mount Dora parks; Gilbert, Palm Island and Trimble.

Of these different pearls, we think the most brilliant is the Green Mountain Scenic Overlook and Trailhead. The Lake Apopka Loop Trail has been the dream of many Lake Apopka environmental entities for 30 plus years. The dream became more real in 2007 when the St Johns River Water Management District declared their intent to open parts of the 20,000 acres of the Lake Apopka North Shore Restoration Area (NSRA) to public access. The Friends of GMSB went into overdrive to link the Byway to this wonderful recreational opportunity. The “mythical” Lake Apopka Loop Trail suddenly came closer to reality. The NSRA, world renown by birders, would soon be open to the public rather than open only upon special invitation.

Many Organizations & Agencies Have Made the Overlook & Trail Possible

Several organizations jumped at this wonderful opportunity to encourage and guide the opening of this area. The North Shore Trail, an 18-mile multi-use trail spanning the 20,000-acre NSRA was put on paper…with significant gaps on either end. The trail structure is already out there. The trail, following some of the old farm roads traversing the tops of the dikes has a road-base of crushed lime rock. Unfortunately, the only access to these trails was not suitable for a “loop” so better connections and trail heads needed to be planned and constructed.

Early on, the District opened an area known as Clay Island along the western side of the NSRA. This area was accessed from Astatula, generally off of Ranch Road. Nearly 6 miles of trails surrounded a series of marshes that actively filtered Lake Apopka water. Several observation towers overlook the marshes and the lake. The District opened another trail head off of CR 448A, just south of their Field Station. This trailhead is known as the North Shore Trailhead and opened up a bit more than 5 miles of trails.

Several environmental organizations began working with Orange County to the east and Lake County to the west to fill the gaps with connections and trailheads. In 2008, Orange County agreed to spend Park Impact fees to build a connection from the eastern terminus to Magnolia Park. That trail was completed in 2012. Phase I opened the trail to the Historic Pumphouse, 4.5 miles away from Magnolia Park. Since then, the District was continuing the restoration efforts and shoring up the dikes and roads. An additional 10 miles of trails officially opened February 20, 2014.

While this was ongoing, the GMSB organization secured several rounds of funding from Florida DOT for planning, preliminary designs and costs for a scenic overlook and trailhead that would allow byway travelers direct access to the restoration area. After 2 years of planning, preparing cost estimates and finding matching funds, GMSB was ready for the National Scenic Byway grant cycle, winning a grant worth $855 thousand, less the match in 2011. Lake County provided the 20% ($171,000) match and Friends of Ferndale, Friends of Lake Apopka, Oakland Nature Preserve, Green Mountain Scenic Byway, and other supporters donated another $2100.

In order to make this facility a reality, GMSB facilitated the legal arrangement between Lake County as manager of the property and St Johns River Water Management District as property owner and worked with Lake County’s legal department to secure appropriate ownership/rights of the different railroad rights-of-way.

The Trailhead and Scenic Overlook Includes:

The facility is located approximately 2 miles north of 561A on CR 455, on the top of the hill south of the existing roundabout. Very quickly, this area became: 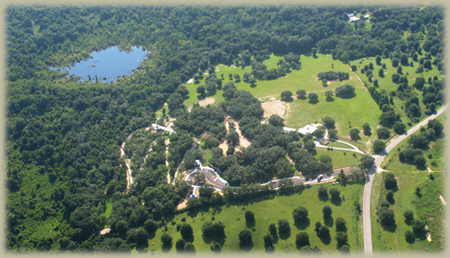 The future of Lake Apopka is “the” destination of sustainable eco-tourism and recreational facilities. It is already bringing many thousands of tourists and visitors to our communities where they will spend their time and their dollars for sustainable economic development.

Green Mountain took a lead role; though without the support of Orange Audubon, Friends of Lake Apopka and other contributors, the project never could have been completed. The volunteer expert editors, writers, compilers, and reviewers made the effort possible. The goal of establishing a National Wildlife Refuge at the Lake Apopka Northshore Restoration Area was a long shot at best. For this to happen, the words “that will take an act of Congress” is not just an idiom. A great deal of political wrangling would have to occur even after the proposal was deemed to be workable.

Never the less, the proposal is still viable and could be one of the projects closest to being National Wildlife Refuge ready in the country…as soon as the ongoing restoration of the property nears completion. When being researched, none of the other known proposed National Wildlife Refuge proposals owned the subject property putting them many millions of dollars behind. Land management objectives of restoration vs refuge management are not always complementary.

How you can help?
Consider becoming a member!
Join in our fund raising efforts.
Contribute whatever you can.